Alexandre Lacazette is keeping Arsenal supporters guessing over his future after issuing a cryptic response to speculation he could be on his way out of the club this summer.

The 29-year-old striker had his worst season yet in front of goal for the Gunners last term, scoring just 12 goals in all competitions, and Mikel Arteta is open to selling the forward to raise funds for further summer signings.

Atletico Madrid are keeping close tabs on the situation after missing out on Lacazette when he was at Lyon back in 2017 and recent reports suggested they are prepared to offer three of their players – Thomas Lemar, Angel Correa or Vitolo – in exchange for the Frenchman.

However, Lacazette poured cold water on rumours of a possible departure last month and reassured fans that Arsenal were his ‘dream club’.

‘I’m happy with my career because I played for Lyon, my club since I was a child,’ he said ahead of Arsenal’s FA Cup final victory over Chelsea.

‘I played for Arsenal, my dream club in the UK.

‘I’m still happy about my career but obviously I would love to win more trophies and this one can make me happier in my Arsenal journey.’

And shortly after Arsenal’s pre-season clash with Aston Villa on Saturday, Lacazette dropped another possible hint that he expects to remain in north London for the forthcoming season.

Lacazette responded with a cheeky wink emoji and many Arsenal fans in the comments section took it as a sign he was staying. 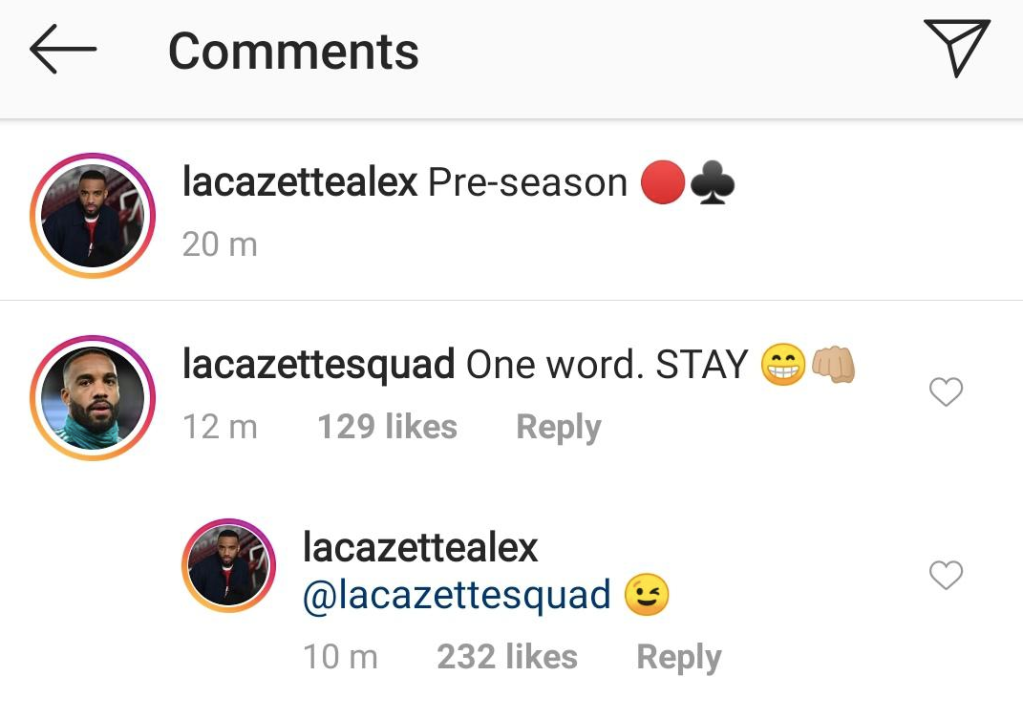 Pierre-Emerick Aubameyang’s brace failed to prevent the Gunners from losing their pre-season clash with Villa in a behind-closed-doors match with Villa at the Emirates this weekend.

Goals from Douglas Luiz and Jacob Ramsey (2) sealed the win for the visitors as Willian made his first Arsenal appearance.

Mesut Ozil played his first competitive match since March and Dani Ceballos was also given a run out after completing his second successive loan move from Real Madrid.

Ceballos said there was ‘never any doubt’ in his mind about returning to Arsenal this summer, despite receiving offers from Madrid and other La Liga clubs to remain in Spain for the upcoming campaign.

‘I’m very pleased to be back with Arsenal – I’m very happy to have come back to a club where I feel important,’ the Spanish midfielder told Arsenal’s official website.

‘It’s true that I had other options, such as staying at Real Madrid and going back to the Spanish league, where there were teams interested in me.

‘I spoke to the coach last year, before the FA Cup final, and told him that I wanted to stay at Arsenal and win titles. I’d been really happy with what Mikel had built at the club since he came in.

‘I had a great time at this club last season and there was never any doubt in my mind that I wanted to come back.’