Gabriel Magalhaes may not be an Arsenal player just yet but his message to David Luiz after the side’s Community Shield victory over Liverpool suggests an official announcement is just around the corner.

The 22-year-old Brazilian looks set to become the Gunners’ second new arrival of the summer, with fellow countryman, Willian, joining on a free transfer earlier this month.

Arsenal beat off strong competition from the likes of Napoli and Manchester United to land Gabriel and the Lille defender has reportedly agreed a five-year contract with the north London outfit.

Speculation over Gabriel’s impending arrival has been building over the last fortnight and Arsenal supporters have been growing impatient for the latest updates, with Mikel Arteta desperate to strengthen his squad for the new season.

And the young centre-back dropped a massive hint that he’ll soon be playing in the red and white of Arsenal as Arteta’s men edged past Liverpool to add the Community Shield to the FA Cup they secured on August 1.

Gabriel, like every Arsenal fan watching, appeared to be going through the emotions as yesterday’s penalty shootout took place at Wembley, with Arsenal captain and talisman Pierre-Emerick Aubameyang slotting home the winning spot-kick.

Reacting to Luiz’s video on Instagram of his successful penalty, Gabriel said: ‘I was nervous, brother.’ 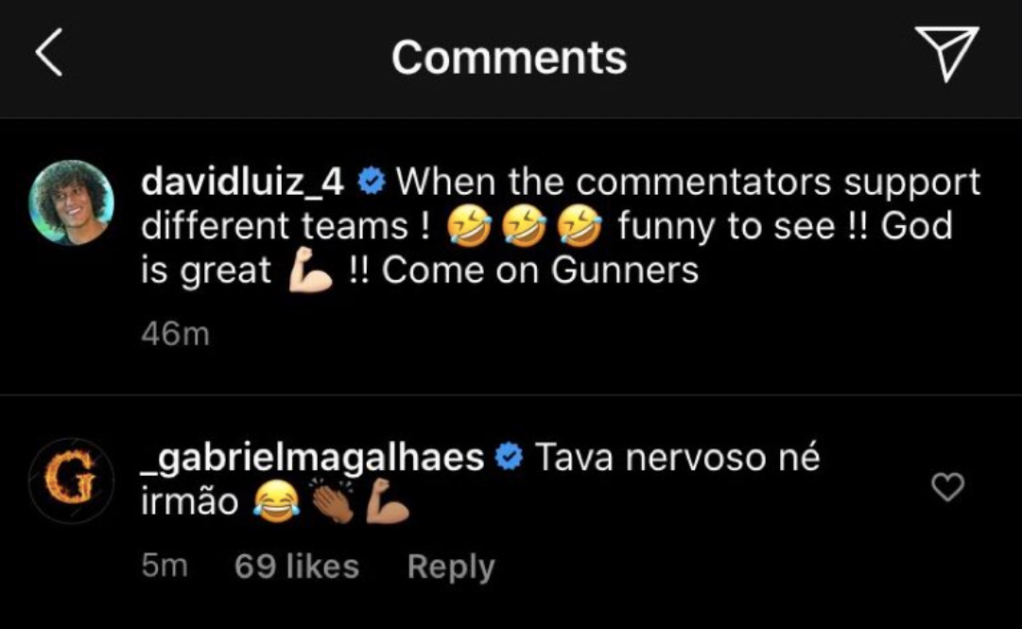 Arsenal legend Martin Keown believes Gabriel could be the ‘future’ of Arsenal’s defence should he complete a move to the Emirates this summer.

‘I saw him play against Chelsea for Lille last season, I went out to watch him.

‘Magnificent player, I think he’s the future. He sees danger and he’s a leader. He’s strong, powerful, I sincerely hope this transfer does go through and he becomes an Arsenal player.

‘That will really secure them at the back whether it’s going to be a four or a three I think this lad can play in either system.’

Paul Merson agrees with Keown about Gabriel’s potential and says Arsenal would be making a ‘big statement’ if the centre-half joins.

He told The Daily Star: ‘If Arsenal sign Gabriel Magalhaes I think it’s a big statement because of all the other clubs that were after him.

‘If Arsenal have managed to get him in without having Champions League football to offer, I think that’s huge.

‘I like what Mikel Arteta is doing. But there are plenty of teams around them getting better as well.

‘Chelsea have bought amazingly well. They are going to close the gap on Liverpool next season.

‘It could be one of the tightest league title races in a long time. But Arsenal have a long way to go to get to that level.’