Bukaya Saka has burst onto the scene in the last 18 months to become an integral player in Mikel Arteta’s side but several of the club’s other emerging academy products have struggled for regular minutes in the first-team.

Willock smashed the ball home from close range to put Thursday’s Europa League Group B clash to bed in the 88th minute and the 21-year-old was named man of the match for the second time on the bounce in the competition, after winning the award for his display at home to Dundalk last week.

Nketiah – who spent last season on loan at Leeds United – also shone at the Emirates with his energy and work-rate and had a goal ruled out for offside in the first half.

Martin Keown and Hargreaves waxed lyrical about the performances of Maitland-Niles, Nketiah and Willock in the BT Sport studio after Arsenal’s win – but the latter suggested that all three players are getting to the stage where they need to be guaranteed regular minutes.

Asked whether Maitland-Niles, Nketiah and Willock were ‘forcing the manager’s hand’ with their impressive showings, Hargreaves replied: ‘It might not just be at Arsenal right now as Saka has forced his way in because he’s been absolutely magnificent.

‘But the problem is that in a big team like this – we saw it with Jadon Sancho at Manchester City – it’s hard to get games there.

‘Even for Phil Foden, as good as he is, he has to work around [Kevin] De Bruyne and David Silva last season and [Ilkay] Gundogan and Bernardo Silva. These young kids in these huge teams, it’s hard. 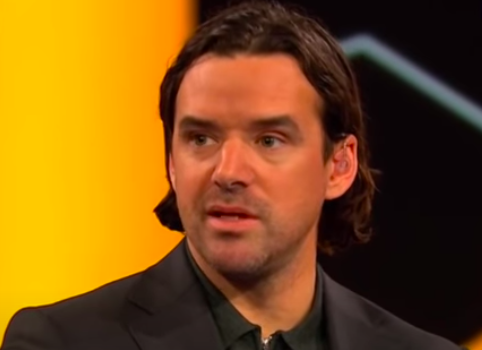 ‘Sometimes it may be good – I think back to Phillip Lahm, Toni Kroos and David Alaba – they went on two-year loans from Bayern Munich and played football at Hoffenheim, at Stuttgart and Leverkusen to get those reps.

‘They played European football for big teams in the Bundelsiga and then came back and walked into the Bayern Munich team.

‘You might see that from these kids because right now it feels like they could probably play more.

‘The opportunities aren’t there because Arsenal have a world-class team. Remember Mesut Ozil’s at home, he can’t get anywhere near this team.’

The ex-Bayern Munich, Manchester United and Manchester City star added: ‘It’s great that these young kids have earned the right to play and he keeps playing them when the opportunities are there.

‘It was a really experienced side that he put out there with David Luiz, Granit Xhaka and Shkodran Mustafi and it’s great that these kids can come and step in and they made the differences today.

‘And credit to Mikel because the culture is there at Arsenal and this was a tough game I thought.