Manchester United captain Harry Maguire appears to have hit back at Chelsea boss Frank Lampard after he was accused of putting Cesar Azpilicueta in a ‘headlock’ during Saturday’s 0-0 draw at Old Trafford.

Lampard was furious that his side were not awarded a penalty after a VAR review saw little wrong with Maguire’s challenge on Azpilicueta from a free-kick during the first half at the Theatre of Dreams.

It was the talking point of a drab match at Old Trafford and Lampard blasted the officials for failing to point to the spot after replays showed Maguire had a firm grip of the Spaniard.

‘Holding is allowed, but headlocks don’t go on,’ Lampard told Match of the Day.

‘I don’t know why VAR didn’t take long and there’s also a monitor to look at. I think if the referee goes to the monitor he gives a penalty.’

Maguire has had a mixed start to the season but the United captain clearly feels the incident has been overplayed in the media as he took to Instagram today to hit back at Lampard’s comments. 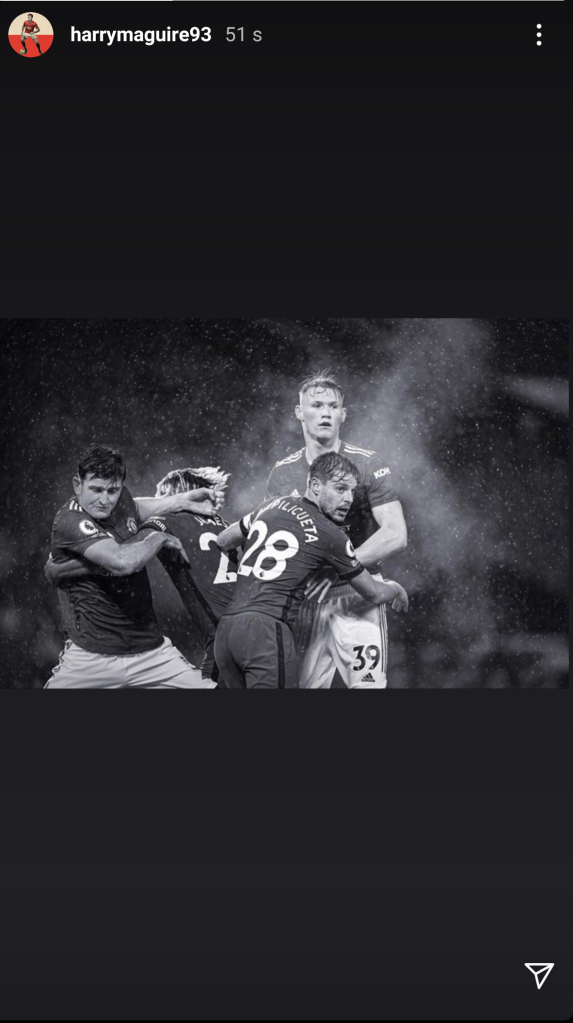 The defender posted a photo from later in the match when Reece James appears to be manhandling Maguire from a set piece, while Azpilicueta is all over Scott McTominay.

Maguire posted the photo without further comment but it’s clear what the England international is alluding to following the coverage of the incident since the draw on Saturday.

Lampard took a dig at United after the match, claiming he warned his side about conceding penalties against the Red Devils because they’re ‘miles ahead’ of clubs in Europe in terms of being given spot kicks.

‘Without a doubt [it was a penalty on Maguire],’ said Lampard.

‘I’m interested to see what everyone else says. I spoke to the lads about how many penalties they get here, over the last two seasons they’re miles ahead in Europe.’