Liverpool goalkeeper Alisson Becker has suggested he will be fit to face Arsenal at Anfield on Monday night.

The Brazilian has missed Liverpool’s last two training sessions with Jurgen Klopp refusing to reveal the extent of the goalkeeper’s injury.

Liverpool have injury worries over Jordan Henderson and Thiago Alcantara ahead of the visit of Mikel Arteta’s side to the north-west and Klopp would rather not make a further change to his back line by replacing Alisson with back-up Adrian.

However, Alisson has raised hopes that he will be fit to face the Gunners with his latest post on Instagram.

The former Roma stopper posted a photo on his story that previewed the game against Arsenal. 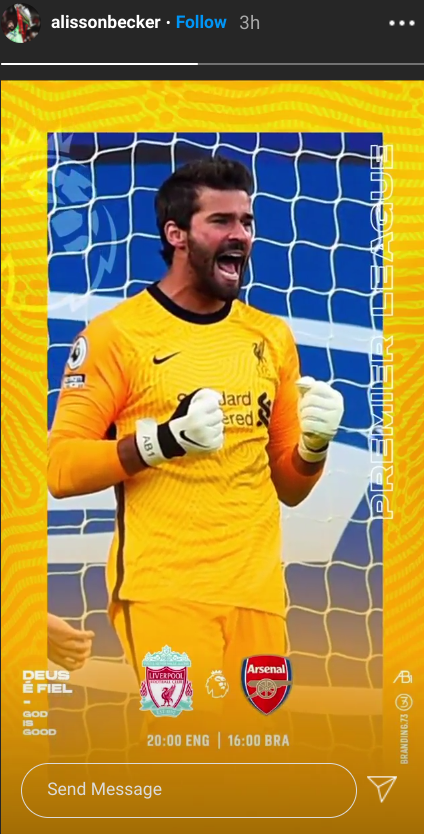 Liverpool are seeking to continue their 100% start to the season following victories against Leeds and Chelsea.

The Reds’ recent record against the Gunners at Anfield is fantastic but Arsenal beat Liverpool in the Community Shield in August in their last outing.

Arteta’s side also beat Liverpool at the Emirates in their last competitive match, winning 2-1 against the Reds with goals from Alexandre Lacazette and Reiss Nelson.