Owen Hargreaves thinks Manchester City are well placed to win the quadruple and says Bayern Munich are the only side that can ‘stop them’.

While the Hargreaves acknowledged any match can be won or lost given the fine margins at the top level, he only views one of his former sides, Bayern Munich, to be major threats to his old team City.

Pep Guardiola’s men saw a 21-match winning streak brought to a grinding halt by local rivals Manchester United earlier this month but they have bounced back with three straight wins.

Their latest victory – a 2-0 stroll against Borussia Monchengladbach courtesy of goals from Kevin De Bruyne and Ilkay Gundogan – saw them advance to the quarter-finals of the Champions League.

They have already reached the final of the Carabao Cup, where they will face Jose Mourinho’s Spurs, are in the quarter-finals of the FA Cup – in which they meet Everton this weekend – and are 14 points clear at the top of the Premier League.

Talk of winning an unprecedented quadruple has started and of all the teams potentially lying in their path, former Manchester United midfielder Hargreaves thinks Bayern are the ones to watch out for.

‘I think you have to say it is [conceivable City can win the quadruple] just from the form they have,’ Hargreaves told BT Sport before the routine win against Monchengladbach on Wednesday night. ‘They don’t really concede. Won 21 of the last 22. 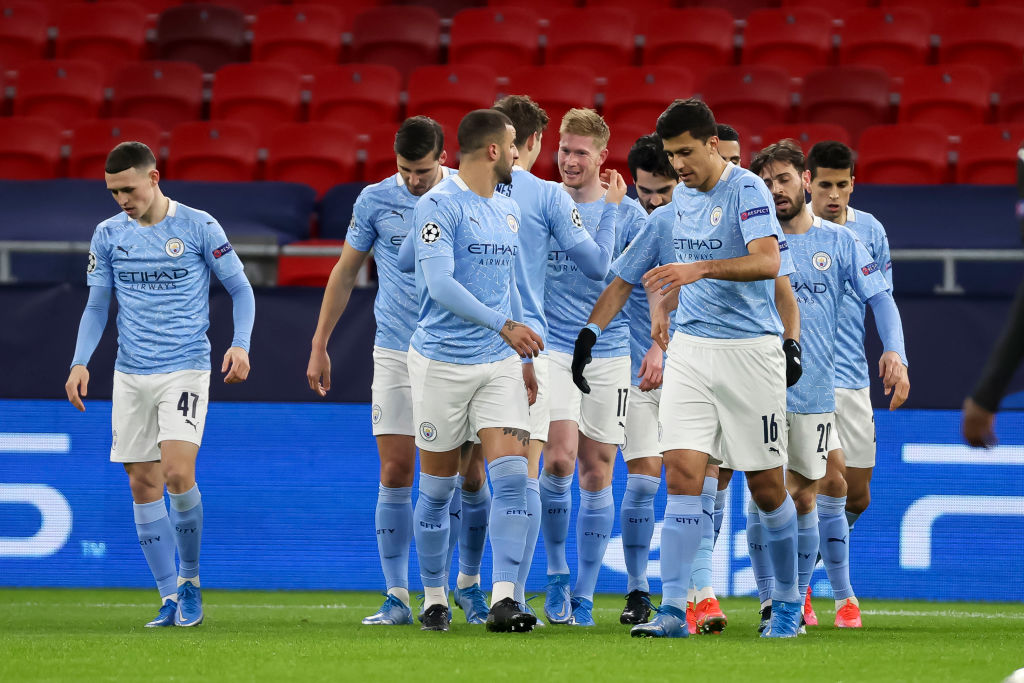 ‘We all know the margins are so fine at that highest level and if you don’t get the details right, you can go out.

‘I think Pep realises now that playing this way maybe he can control some of those little details.

‘The only team I see that can stop them, is Bayern Munich. That’s probably the only one I see.

‘But if they have a bad day then as we saw with United, they can be beaten.

Fellow former United star Rio Ferdinand warned, however, that the ‘wheels can fall off’ quickly.

‘The thing that can happen is it can be all rosy,’ said Ferdinand. ‘The team I was in in 2008/09 and we went a month longer being able to win the quadruple and still being in things.

‘The wheels can fall off. You can get injuries, suspensions, a loss of form.

‘You lose one game and it can destabilise everything. There’s a lot of variables that can dictate what can happen towards the end of the season.

‘Calm and just take it game by game, which they’ll be saying in every interview.’