Wolves goalkeeper Rui Patricio required treatment for a head injury in his side’s Premier League clash with Liverpool after a collision with his team-mate Conor Coady.

The Portugal international was left unconscious, after being beaten by a strike from offside Mohamed Salah, as his head hit the trailing leg of Coady.

Patricio was left flat out on the turf while medical staff attended to him and received oxygen.

He was eventually stretchered off and replaced by backup goalkeeper John Ruddy, with Wolves using a concussion substitution.

Diogo Jota’s first-half stoppage time goal was enough to give Liverpool a 1-0 win on the night, but the gloss of the win was taken off by Patricio’s worrying injury.

Match-winner Jota said after the match: ‘Life is more important, I hope it’s not too serious. We wish [Rui Patricio] a speedy recovery. 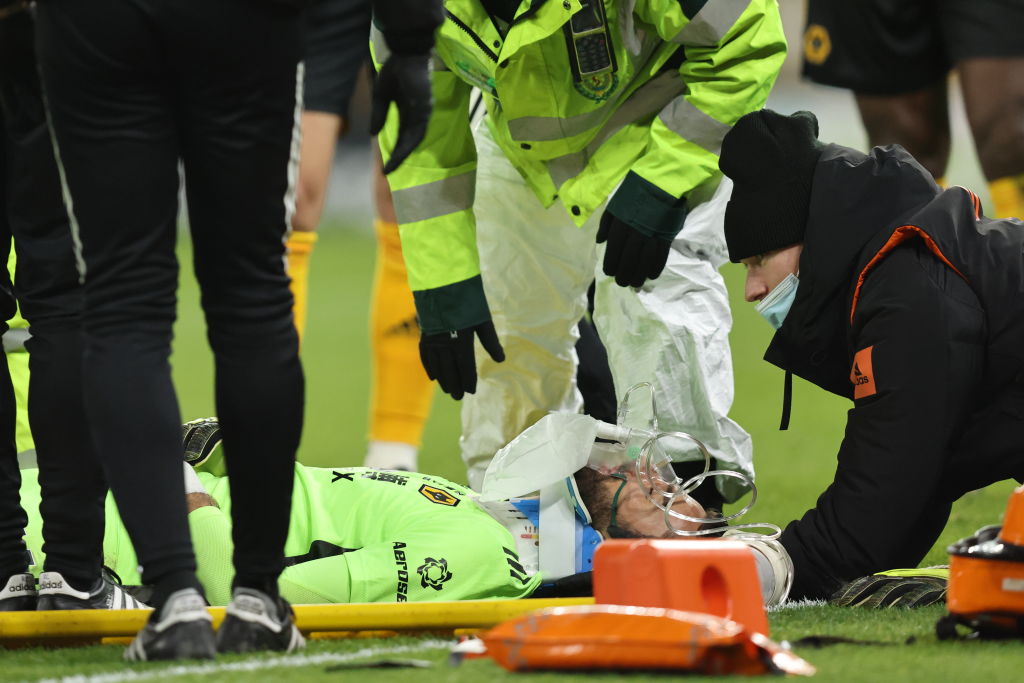 ‘Against these kind of teams you have to take advantage when they are unbalanced and they were in that moment. It was good movement and a good goal.

‘We need to improve a lot in this competition and hopefully this can be the start of a great run to the end of the season.

‘It was a hard game, we knew that, they made it very hard for us. We’re very happy with the victory. We have been struggling in the Premier League and we want to change that.’

Former Chelsea goalkeeper Robert Green told BBC Five Live: ‘Even if it was the impact on the head, the whiplash through the neck and the damage that can be done can be quite great. They have to make sure his welfare is taken care of before they move him.

‘They already had one serious head injury this season. If there’s a club that’s depserate to get this right after what happened to Raul Jimenez, it’s Wolves.

‘[Concussion substitutions is] such an obvious answer that you wonder why it took so long.

‘It allows teams to make substitutions freely and be more positive in their subs.

‘The last thing you want is for these closing minutes to be marred because a team has been reduced to 10 men through no fault of their own.’