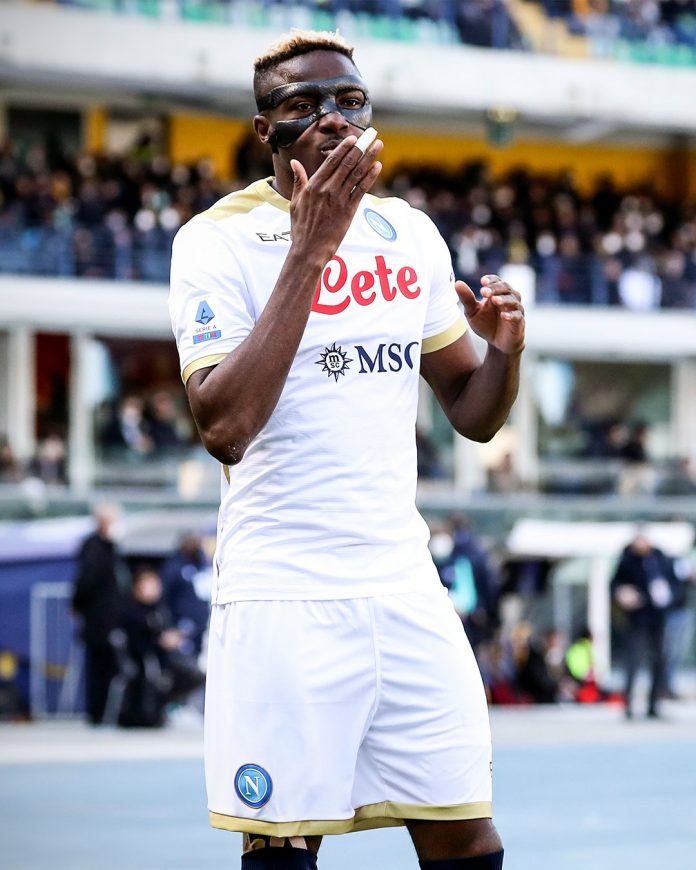 African players like Salah and Osimhen kept their scoring boots on at the weekend to help push for their team’s title challenge. Liverpool are second 3 points behind City, same thing applies for Napoli who are second behind Ac Milan with 3 points as well.

Mo Salah scored his 150th goal in the EPL against Brighton on Saturday in a comfortable 0-2 win. He still remains the top scorer in the league so far this season with 19 goals. It’s looking like the award is his to lose looking at his current form and the only player that comes close in second are his teammates Jota and Mane with 12 goals each and non can boast of the same scoring prowess this season.

SERIA A – VERONA VS NAPOLI :

Nigeria’s goal poacher Victor Osimhen scored a brace away from home against Verona where Napoli won 1-2. The win keeps Napoli’s league hopes alive as it took them to second on the log. Osimhen now has 9 goals in the league this season.

Former Liverpool striker Taiwo Awoniyi scored the first goal of their home game against Stuttgart which ended in a 1-1 draw. Awoniyi gave his side the lead in the 41st minute from the penalty spot. He has now scored 11 goals in 23 games so far in the German Bundesliga.

Ghanian combative midfielder Thomas Partey scored his second of the season to help Arsenal stay on course for a top 4 finish. The former Athletico Madrid player gave his side the lead in the 11th minute and the game ended 2-0 in favor of the Gunners with Lacazzete scoring the second goal.

SERIA A – SALERNITANA VS SASSUOLO :

Hamed Traore the elder brother to Manchester United’s Amad Traore gave his side the lead after being 1-0 down by scoring the second goal in a 2-2 draw away from home. The attacking midfielder continued his scoring form this season by taking his goal tally to 4 in the Seria A.