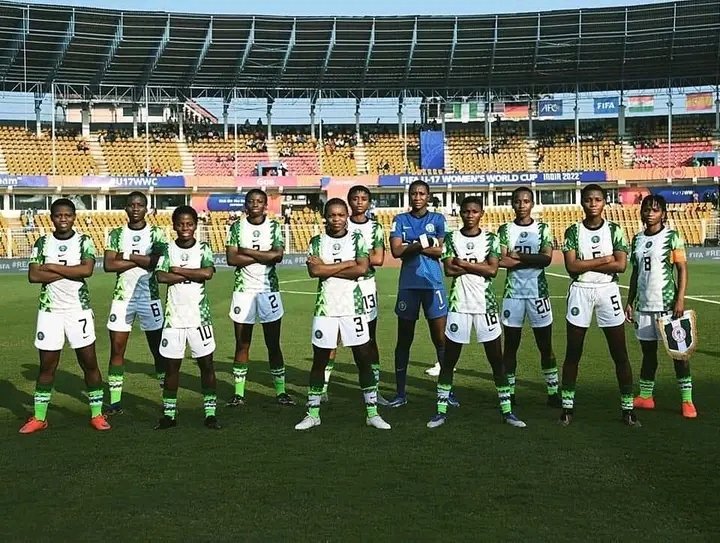 Nigeria under 17 girls the Flamingos lost to the Colombians 6-5 on penalties in the semi finals this afternoon after playing out a goalless draw after 90 minutes.

The game started with the Nigerian side dominating possession but struggled to create chances. Mid-way into the first half the Colombians got into the game and created a goal scoring opportunity in the 26th minute with a shot that went wide but had the goalkeeper rooted to the spot.

More goal scoring chances was created by the Colombians in the first half they even scored a goal but it was rightly ruled out for offside in the 44th minute. The first half ended with Colombia being the better side.

The South American side started the second half the way they ended the first with Caicedo and Munoz being constant threat to the Nigerian defense but Omilana was always on hand to save the Flamingos.

The match ended goalless with Colombia having over 10 shots with 6 being on target and Nigeria had their goalkeeper to thank for keeping the result goalless.

Nigeria were a spot kick away from making history again but Edafe who scored the winning penalty against the USA missed the decider with Nigeria leading 4-3. Colombia won the game in sudden death after scoring the next two and Folorunsho missed the 6th for her team to send Nigeria crashing out.

Colombia will now wait for the winner between Germany and Spain for the final while Nigeria will play the loser of that game for third place; both games will be played on Sunday, 30th October.