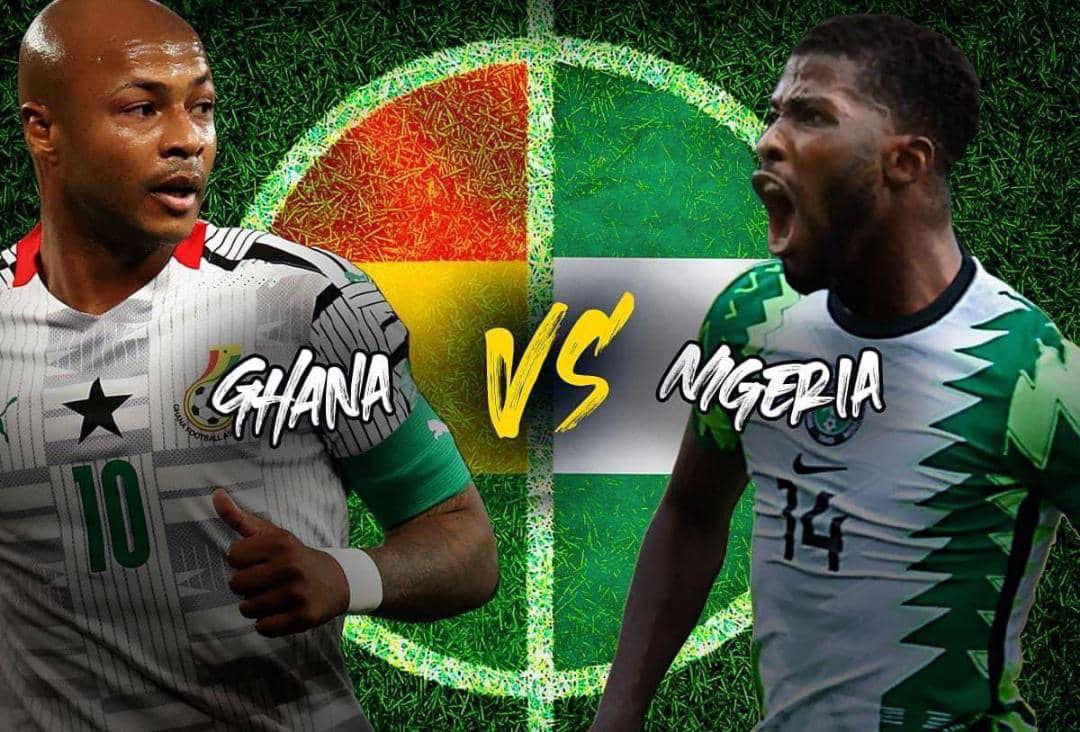 The bitter rivalry between two West African football heavyweights Ghana and Nigeria will continue on Friday, 25th of March, where the Black Stars will be hosting the Super Eagles in the 1st leg for a place at the World Cup in Qatar at the Baba Yara stadium in Kumasi, Ghana. Kick off time will be 8:30pm Nigerian time and 7:30pm GMT.

Both sides had a disappointing AFCON in Cameroon but Ghana’s performance in the competition was worse. The Black Stars were knocked out in the group stage picking up just a point and finishing bottom of the group that had debutantes Comoros which finished ahead of them. Whilst Nigeria were knocked out by Tunisia in the round of 16 by a lone goal after topping their group convincingly with 9 points.

Ghana has a better head-to-head record over Nigeria, both teams have met 56 times Black stars winning 25, Nigeria 12 and they’ve shared the spoils on 19 occasions.

However, when it comes to games of this magnitude form or past records are thrown out of the window, the team that converts their chances on the day comes out victorious. Nigeria on paper has a more formidable attack but with what is at stake the Ghanian defense won’t give the likes of Osimhen any breathing space. The battle in the middle of the park with likes of Partey, Baba, Etebo and Aribo locking hornswill be fierce with both teams trying to hold possesion and create chances for their strikers. One thing is certain, we are in for crunchy encounter with a lot of fireworks.

Ghana will be missing their talisman and captain Andre Ayew who now plays for Al Sadd in Qatar due to suspension which he got from the Nations Cup. Also, they will miss exciting winger Kamaldeen Sulemana who plies his trade for Rennes in the French Ligue 1. Jordan Ayew is a doubt but could be fit for the 1st leg after testing positive for covid-19.

On the flip side, the Super Eagles will be without their combative and ever reliable midfielder Wilfred Ndidi due to injury, while Maduka Okoye the team’s number one goalkeeper will miss the first leg and his a doubt for the second  leg, he tested positive for covid-19 after his team’s league game over the weekend.

Players to look out for

Napoli’s hitman Osimhen is first on the list to watch out for in this game. He so far has 11 goals in the Seria A and has scored 10 goals in 18 games for the national team. He is currently in blistering form and is one Ghanians will be worried about.

Crystal Palace striker Jordan Ayew has recorded 18 goals in 73 matches for Black stars, while he can only boast of 1 goal in the EPL this season.

Exciting teenager Felix Afena-Gyan of Roma (striker) who bust into limelight after he came of the bench in Seria A to score a brace against Genoa is also another to watch out for. Others are Idrissu Baba of Mallorca (midfielder), Thomas Partey of Arsenal, Mohamed Kudus of Ajax (Midfielder) and Amartey of Leicester (defender).

For the Eagles, Moses Simon of Nantes who was outstanding at the Nations Cup in Cameroon by being a constant menace to opposing defenders. He scored once and created two assist in Cameroon and his currently doing well for his club.  Others are, Ademola Lookman of Leicester, Kelechi Iheanacho of Leicester, Emmanuel Dennis of Watford and Joe Aribo of Rangers.

The second leg of this encounter will be played on Tuesday 29th of March at Moshood Abiola National stadium in Abuja, Nigeria.